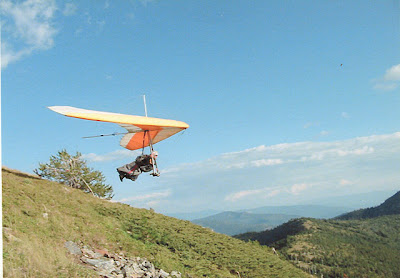 Hang gliding is a flying activity where a pilot will fly in an aircraft that is unpowered. The aircraft is referred to as being a hang glider, and it is often light in weight, and the glider can often launch by foot. Hang gliding is basically a recreational sport, but it has been used for both military and commercial applications. While the hang glider may be light in weight, it will often be made out of materials that are strong and highly durable. Most contemporary hang gliders will be made out of aluminum or a composite wing, but older models will be made with materials such as bamboo, metal, or wood.
Some hang gliders even come with aircraft control devices, and the pilot will generally hang beneath the wing while flying. While hang gliding is very popular today, it has been around for centuries, and it has basically been used as a method of gliding down hills. However, the hang gliding technology of today allows gliders to stay in the air for hours at a time, and they can also go up thousands of feet, and even perform aerobatic tricks. There have been cases in which hang gliders have actually taken cross country trips. It should be noted that hang gliders will be broken down into three types, and these are rigid hang gliders, flexible wing hang gliders, and Class 2 hang gliders.
The flexible wing glider will allow the flight to be controlled by the glider wing, which will be flexible. The pilot can control direction by simply shifting his or her weight. As the name implies, the rigid wing glider has wings which are more rigid, and flying will be controlled by the spoilers. These spoilers will generally be located on the top part of the wing. Like the flexible glider, the pilot will hang below the wing. With the Class 2 hang glider, the pilot will actually be integrated with the wing via the fairing. This type of structure is considered to be the best, and it is also the most expensive. 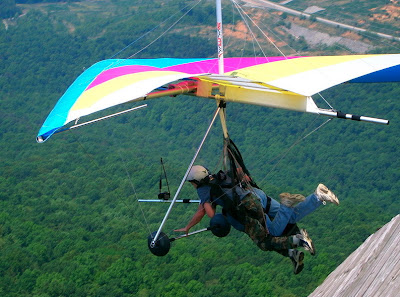 Because of the nature of this sport, many people have always considered hang gliding to be unsafe. There is a bit of truth to this, since Otto Lilienthal, the first person to hang glide, died in a crash as a result of a spine that was fractured. While modern hang gliders are designed to be durable, operating them in hazardous weather conditions can be dangerous.

Hang gliders often fly cross-country in competition. Some record distances have been recorded further than 600Km! Standard competition distance may be up 200Km. :o)