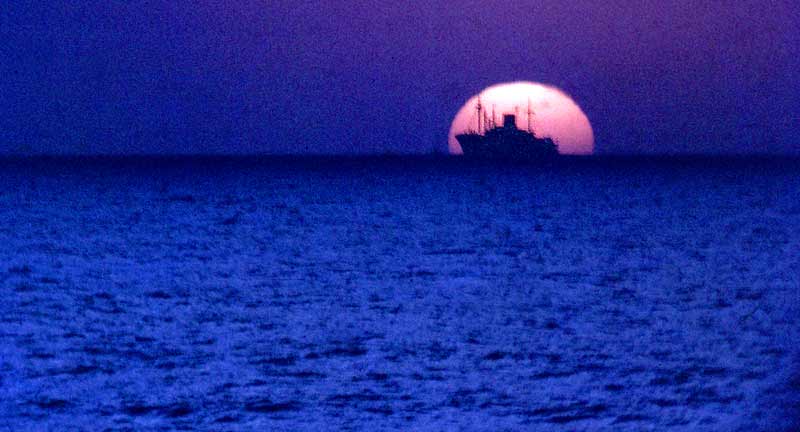 An ocean (from Greek Ὠκεανὸς, "okeanos" Oceanus) is a major body of saline water, and a principal component of the hydrosphere. Approximately 70.9% of the Earth's surface (~3.61 X 1014 m2) is covered by ocean, a continuous body of water that is customarily divided into several principal oceans and smaller seas.
More than half of this area is over 3,000 metres (9,800 ft) deep. Average oceanic salinity is around 35 parts per thousand (ppt) (3.5%), and nearly all seawater has a salinity in the range of 30 to 38 ppt. Scientists estimate that 230,000 marine life forms of all types are currently known, but the total could be up to 10 times that number.
Though generally described as several 'separate' oceans, these waters comprise one global, interconnected body of salt water sometimes referred to as the World Ocean or global ocean. This concept of a continuous body of water with relatively free interchange among its parts is of fundamental importance to oceanography.
The major oceanic divisions are defined in part by the continents, various archipelagos, and other criteria. These divisions are (in descending order of size):
The Pacific and Atlantic may be further subdivided by the equator into northern and southern portions. Smaller regions of the oceans are called seas, gulfs, bays, straits and other names.
Geologically, an ocean is an area of oceanic crust covered by water. Oceanic crust is the thin layer of solidified volcanic basalt that covers the Earth's mantle. Continental crust is thicker but less dense. From this perspective, the earth has three oceans: the World Ocean, the Caspian Sea, and Black Sea. The latter two were formed by the collision of Cimmeria with Laurasia. The Mediterranean Sea is at times a discrete ocean, because tectonic plate movement has repeatedly broken its connection to the World Ocean through the Strait of Gibraltar. The Black Sea is connected to the Mediterranean through the Bosporus, but the Bosporus is a natural canal cut through continental rock some 7,000 years ago, rather than a piece of oceanic sea floor like the Strait of Gibraltar.
Despite their names, smaller landlocked bodies of saltwater that are not connected with the World Ocean, such as the Aral Sea, are actually salt lakes. 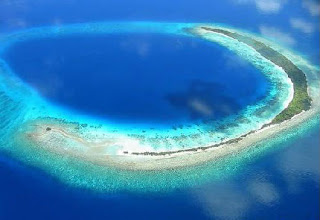 Oceans Borders
Though generally described as several 'separate' oceans, these waters comprise one global, interconnected body of salt water sometimes referred to as the World Ocean or global ocean. This concept of a continuous body of water with relatively free interchange among its parts is of fundamental importance to oceanography.
[Read more] 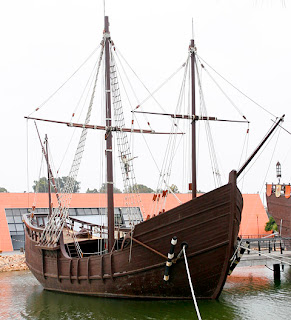 Ocean Exploration
Ocean exploration is a term of oceanography describing the exploration of ocean surfaces. It is also the period when people explored the ocean boundaries. Notable explorers include: the Greeks, the Egyptians, the Polynesians, the Phoenicians, Phytheas, Herodotus, the Vikings, The Portuguese, and Christopher Columbus. Travel on the surface of the ocean through the use of boats dates back to prehistoric times, but only in modern times has extensive underwater exploration become possible. Scientific investigations began with such early scientists as James Cook, Charles Darwin and Edmund Halley.
[Read more] 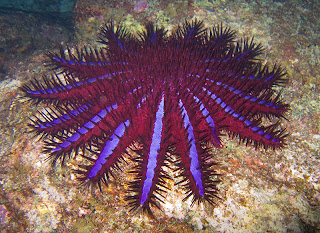 Marine Biology
Marine biology is the scientific study of organisms in the ocean or other marine or brackish bodies of water. Given that in biology many phyla, families and genera have some species that live in the sea and others that live on land, marine biology classifies species based on the environment rather than on taxonomy. Marine biology differs from marine ecology as marine ecology is focused on how organisms interact with each other and the environment, and biology is the study of the organisms themselves.
[Read more]