The Unique Characteristics of Primates

General Characteristics
Taxonomy is the science of classification of organisms. Primates are difficult to classify. Most scientists classify primates, monkeys, and apes in the Kingdom Animalia, the Phylum Chordata (animals with a supporting rod along the back, this also includes sharks and rays), Subphylum Vertebrata (animals with a bony backbone), the Class Mammalia, and the Order Primates. As of 2004, there are 363 species of primates. In addition to monkeys and apes, the order includes prosimians ("premonkeys") such as lemurs and bushbabies as well as humans. 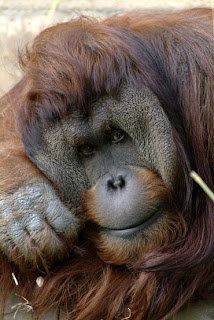 Not all primates possess the same characteristics—there is no unique characteristic that defines a primate. Most shared characteristics and trends are not derived but instead are a retention of ancestral features, which also adds difficulty to classifying primates. Many of these characteristics are behavioral, or depend on soft tissue anatomy; this does not help in identifying fossil primates. This retention of a fairly generalized body type, unlike hoof stock for example, reflects their diversity of life style. Their unspecialized morphology and highly flexible behavior allows them to fill many niches and adapt to environmental change.

There is a number of rather specific primate characteristics, such as details of the bones of the foot and skull. However, these characteristics do not make it easy for scientists to categorize early mammals and primates. There are a few scientists who consider tree shrews primates and bats the closest living relative to primates.

Some distinguishing characteristics of primates include:

The Order Primates is divided into two Suborders: Strepsirhini, the lemurs and lorises, and the Haplorhini, the monkeys and apes.

1. Suborder Strepsirhini
The first primate like animal appeared around 70 million years ago. These are described as early prosimians. These earliest primates were nocturnal and arboreal, and many of the distinguishing characteristics of primates are actually associated with a night life in the trees. These characteristics were retained and have contributed to the success of primate lines that descended into terrestrial habitats. There are no prosimians in the New World, instead their nocturnal, insectivorous niche is taken up by other mammals, such as opossums. Strepsirhines include the lemurs on Lemur Island and in the Small Mammal House as well as lorises and bushbabies. 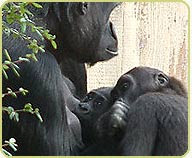 * Wet, naked, glandular nostrils (the rhinarium)
* Most are nocturnal
* Prominent whiskers
* Large, mobile ears
* Large eyes adapted for a nocturnal lifestyle, tapetum lucidum, a layer of reflective tissue behind the retina, which reflects light back toward the pupil, making the eyes visible in the dark, similar to a cat’s eye
* Gap in the upper border of each nostril
* Highly developed sense of smell
* Divided upper lip attached to gums by a membrane
* Dog-like faces, protruding snout (rostrum)
* Specialized scent glands, to allow for non-visual communication
* Tooth comb from lower incisors and canines
* Orbital bar
* Locomotor specializations: vertical clinging and leaping, slow quadrupedalism
* Grooming claw on second digit of foot and flat nails everywhere else
* Simple placenta

*Note: Most taxonomists have reclassified Prosimii as the suborder Strepsirhini. As the above list of characteristics show Strepsirhini exhibit more “primitive” characteristics. Anthropoidea and Tarsiodea, which were once included as prosimians, are now combined to form the Suborder Haplorhini or animals with a simple, dry nose.

The living Strepsirhini are divided into two main infraorders; the Lemuriformes, which contain the lemurs, dwarf lemurs, sifakas, and aye-ayes; and the Lorisiformes, the lorises and bushbabies.

2. Suborder Haplorhini
The haplorhines are considered the “higher” primates. This suborder includes all great apes, monkeys, tarsiers, and humans. Scientists believe that haplorhines first appeared in the Eocene, or 50 million years ago. These are the ancestors of today’s monkeys and apes.

Some Haplorhini characteristics include:

* The rhinarium is dry; nostrils are more rounded and continuous
* The upper lip is continuous and not attached to gums
* Free upper lip allows for more expressive face
* Eyes lack tapetum and do not reflect light
* Larger brain
* Reduced snout and less reliant on sense of smell
* Binocular and stereoscopic vision
* Delayed sexual maturity
* Usually one offspring, with extended maternal care
* Extended life span
* Trend towards longer arms than legs

The living haplorhines are divided into three infraorders the Tarsiiformes, or tarsiers, a very controversial group; the Platyrrhini, or New World monkeys; and the Catarrhini, or Old World monkeys, apes and humans.

Infraorder Tarsiiformes
Tarsiers display many characteristics of both prosimians and anthropoids; these terms are no longer used as true taxonomic categories, but are often used instead of Haplorhini and Strepsirhini when discussing basic morphology. As mentioned in the above note, the position of the tarsiers is still a question in primatology. However, it has been largely resolved by a change of nomenclature. “Rhine” means nose, in Greek, and generally refers to the specific nasal anatomy that can be used to distinguish these groups. Strepsirhines have dog-like, wet noses, whereas the rest of the primates have simple, dry noses. Tarsiers have a simple, dry nose. Therefore, prosimians become Strepsirhini and anthropoids become Haplorhini. By this definition, tarsiers become haplorhines, and the problem no longer exists.

The only genus in this group is Tarsius, or tarsiers. They are considered living fossils being the nearest relatives to the Haplorhini ancestors. They have changed very little and show characteristics of both prosimians and anthropoids. Like prosimians, they have a simple digestive tract, are nocturnal insectivores, have legs built for leaping and use grooming claws. Like anthropoids, they have a complete ocular orbit, a more advanced placenta, lack both a dental comb and the tapetum lucidum in their eyes. They also show a relatively larger brain than prosimians.

Infraorder Platyrrhini
The platyrrhines are also known as the New World monkeys. This includes all animals living in both Central and South America, from tamarins and marmosets to howlers and spider monkeys. There are no living non-human primates in North America, even though this is where some of the oldest primate fossils have been found. Scientists do not know the reason for this.

South America was isolated from the rest of the world in the Eocene and Oligocene, 40 and 25 million years ago. It seems to have been colonized by early anthropoids, either from Africa or North America via some sort of land bridge, or floating vegetation raft about 40 million years ago. These monkeys have evolved independently from that time on. New World monkeys are every bit as advanced as Old World monkeys with some very impressive adaptations that Old World monkeys lack, such as a prehensile tail.

The word platyrrhini, again describes the nose. Platyrrhines all have broad, flat noses and outward directed nasal openings. Platyrrhini is divided into two families the Cebidae, or monkeys, and the Callitrichidae, or tamarins and marmosets. Tamarins, marmosets, howler monkeys, and pale-headed saki monkeys.

Some Platyrrhini characteristics include:

* Outward facing, broad nostrils, flat, dry nose
* All but one genus, the owl monkeys, are diurnal
* Lack a bony tube between eardrum and outer ear
* Large brains and highly developed vision
* They are intelligent and active animals
* Many exhibit developed social structures and family groups
* Some have special scent glands
* Lack ischial callosities (bare patches of skin on rump)
* Imperfect opposability of thumb and poorly developed finger grip
* The big toe is large and strongly opposable
* Long, well developed tail, prehensile in some groups
* Some groups are fantastically arboreal, using their tail as a fifth limb
* There are no terrestrial New World monkeys
* Cebidae have fingernails instead of claws, which aid in gripping
* Callitrichidae have claws, modified nails, that aid in climbing tree trunks
* Three premolars

Infraorder Catarrhini
The catarrhines include all other primates, or Old World monkeys, apes and humans. Like the word Platyrrhini, Catarrhini refers to the shape of the nose and means down-facing nose. The nostrils are narrow, close together, and face downward. This infraorder is usually divided into two superfamilies, the Cercopithecoidea, or Old World monkeys, and the Hominoidea, or apes and humans.

Some Catarrhini characteristics include: 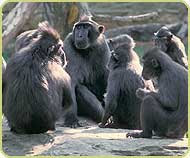 Superfamily Hominoidea
This superfamily contains humans and their close relatives, the apes. The first hominoids first appeared about 25 million years ago. Present-day hominoids are characterized by the absence of tails and by rather primitive rounded molars. This means that hominoid molars are less specialized than other primates.

Some Hominoid characteristics include:

Most primatologists divide the Superfamily Hominoidea into two families, the Hylobatidae, or gibbons and siamangs, and the Hominidae, the humans and great apes. This division is still under debate. Some feel that similarities between human and ape DNA warrant classification in the same family. Others feel that human’s social and cognitive abilities place them in a family of their own, separate from the apes.

Family Hylobatidae
This family contains the gibbons and siamangs. They are the smallest and most numerous of the apes, (excluding humans). Because of their size hylobatids are sometimes referred to as lesser apes. They exhibit very little sexual dimorphism, although sex-specific color can be seen in white-cheeked gibbons. Males are nearly all black, while females are blond. They also have primitive or generalist molars. Relative to body size they have particularly long arms and are by far the best primate brachiators.

Some Hylobatidae characteristics include:

* Long forearms and arms, relative to body size
* Ischial callosities, or bare skin on rumps
* The only hominoid that does not build sleeping nests
* Omnivorous, but eats mostly fruit
* Territorial
* Live in monogamous pairs
* Some have enlarged throat sacs used when calling
* Largest canines of the apes
* Found only in the tropical forests of Southeast Asia
* Large brain and eye orbits
* Arm and shoulder girdle built for suspension
* Highly arboreal

Some Hominidae characteristics include:

* Larger brain
* Complex social behaviors, including complex vocalizations
* Larger body size
* Mostly terrestrial, only orangutans are really arboreal
* Sexual dimorphism
* Opposable thumbs and big toes, except in humans, whose big toes are not opposable
* All digits have flattened nails
* Lack ischial callosities
* Many skeletal differences from other primates related to their upright/semi-upright posture
* 32 teeth, including two premolars
* All, but humans, are good climbers
* Make and use nests
* Prolonged period of parental care
* Birth of a single young

University of California, Davis, Department of Anthropology, The Strepsirhini and Tarsiiformes, Fall 1999, Ant 154

University of Texas, Austin, Department of Anthropology, Primates as an Adaptive Array, May 2001

I am really happy to say it’s an interesting post to read . I learn new information from your article , you are doing a great job .
difference between Strepsirhini and Haplorhini