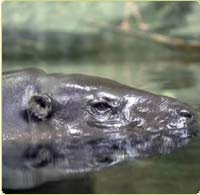 Natural History
Pygmy hippopotamuses are members of the family Hippopotamidae, along with the larger Nile hippopotamuses. Their next closest living relatives are pigs and peccaries.
In the wild, pygmy hippopotamuses are rare and it seems that there may never have been many of them in existence at any one time.
In 1927 Harvey Firestone (who owned a large rubber plantation in Liberia) gave President Calvin Coolidge a male pygmy hippo named Billy as a gift. Billy is the ancestor to almost all pygmy hippos living in American zoos.

Distribution and Habitat
The pygmy hippopotamus is found in West Africa, mainly confined to Liberia, with small numbers in the neighboring countries of Sierra Leone, Guinea and the Ivory Coast. They prefer dense, swampy forests near rivers, streams and creeks.

Diet
Pygmy hippopotamuses are herbivores and feed on various vegetation, including succulents, tender shoots, leaves, roots, grasses, and fallen fruit. Unlike Nile hippopotamuses, pygmy hippopotamuses also feed on aquatic plants. They usually begin feeding in the afternoon, and continue until midnight. Hippopotamuses have multi-chambered stomachs that function like that of ruminants, however they do not chew cud. They do enjoy some of the advantages of rumination, but are classified as pseudoruminants.

Social Structure
Because of their secretive, nocturnal habits, little is known about their lifestyle. Much of our knowledge comes from observations of pygmy hippopotamuses in zoos, where they breed well and are considered to be self-sustaining. Pygmy hippopotamuses are not typically gregarious and live singly or in pairs. Days are usually spent hidden in swamps, wallows or rivers. Pygmy hippopotamuses are not considered territorial. Instead a male wanders over a home range that overlaps with other male home ranges and includes a number of female ranges in its borders. When moving through their home range, pygmy hippopotamuses follow fixed, well-defined paths through the underbrush. These paths are marked with dung or muck-spreading, which is spread by tail wagging during defecation. Males may fight for access to females using their teeth and jaws, similar to male Nile hippopotamuses.

Reproduction
When pygmy hippopotamuses are found together it is usually a male and female consorting before mating. This sort of courtship is not seen in the Nile hippopotamuses. They have been known to mate in and out of the water. Pygmy hippopotamuses reach reproductive maturity at about three years. Gestation is six to seven months, after which a single calf is born, usually on land. The newborn weighs ten to 14 pounds (4.5 to 6.4 kg).

Life Span
Their potential life span is believed to be between 30 and 50 years.

Status
Pygmy hippopotamuses are extremely rare in the wild, with probably no more than a few thousand animals remaining. Their primary threat is loss of their forest habitat due to the timber industry. In addition, they have been hunted extensively for food and trophies (teeth), and are often killed to prevent the damage they can do to riverside gardens. Political and civil unrest in the region also poses a threat to pygmy hippopotamus survival. The Sarpo National Park in Liberia provides suitable habitat for the pygmy hippopotamus and therefore provides some hope for their survival in the future. The Nigerian population may already be extinct.

The National Zoo is a participant in the American Zoo and Aquarium Association's Species Survival Plan for this animal. Since 1929, 58 of these rare animals have been born at the Zoo. Over the years, the Zoo has sent pygmy hippopotamuses to zoos in Portland, Fort Worth, Chicago, Philadelphia, Pittsburgh, San Antonio, Canada, Venezuela, Argentina, Brazil, Chile, England, South Africa, Sri Lanka, Singapore, and Thailand.

Although pygmy hippopotamuses look relatively small and docile, they can be extremely aggressive when it comes to protecting their home or enclosure. They are not thought to be social animals. However, our animals are familiar with their daily Zoo routine and do recognize their keepers as food providers.

Yes. They have large, sharp, tusk-like canine teeth that are used for protection and defense.

3. Why do they open their mouths?

That is usually a threat display. By opening their jaws and exhibiting their canines, the hippopotamuses hope to intimidate possible enemies. Also, our animals have been conditioned to open their mouth so keepers can inspect their teeth. Keepers give them treats to reinforce this behavior.

4. What is the white oil on the pygmy hippo's body?

5. How closely related are pygmy and Nile hippos?

Pygmy and Nile hippopotamuses are both members of the same family of mammals Hippopotamidae. At first glance they may look and act very much alike; but they are, in fact, two very distinct species with different lifestyles and physical adaptations.