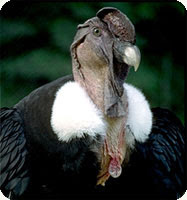 Description
Andean condors are one of the largest flying birds in the world, weighing 20 to 26 pounds (nine to 12 kg). They have very broad wings with a span of more than nine feet (three meters). In spite of their weight, the great wing surface allows them to soar on rising air currents almost indefinitely. The birds are black with white patches on the wings and a white ruff around the neck. Their heads are naked, but the male has a fleshy comb. Males have brown eyes; females have garnet red eyes. They have been known to live more than 75 years in zoos.

Distribution and Habitat
The Andean condor was once found in the Andes Mountains of South America from Venezuela to the islands of Tierra del Fuego in the Strait of Magellan. They have been extirpated from many parts of their former range. They are generally confined to areas where strong winds are available to support their soaring flight. These habitats include deserts that produce strong thermals, high mountains with deflected winds off the steep slopes, and coasts where sea breezes deflect off dunes.

Diet
Condors are scavengers or carrion feeders. They soar aloft, a highly energy-efficient method of hunting, looking for carcasses. They have excellent eyesight and watch the actions of other animals as clues to food. They are not equipped to hunt as their feet have blunt claws instead of the sharp talons of raptors. The beak is strong but is best adapted to tear meat that is already rotting. They clean their naked heads by scraping them along the ground to remove debris from their meals. Inland on the pampas or the slopes of the Andes, they feed on carcasses of farm animals or wild ungulates. On the coast they feed on the beached carcasses of marine mammals and raid sea bird colonies for eggs and nestlings.

Reproduction
T he male begins his courtship display by drawing himself erect, fully extending his wings, and clicking his tongue, while the reddish skin of his neck becomes bright yellow. The birds do not build a nest, but lay their eggs on bare ground on a ledge or in a cave. The female lays a single egg which both parents incubate for about 54 to 58 days. Fledging takes another 180 days, so that a pair breeds onlyevery other year under normal conditions. Parents continue to care for the fledgling for a full year.

Conservation
The Andean condor is officially listed as endangered, although it has greater numbers than its California relation. Biologists estimate that a few thousand birds remain in the wild, concentrated mostly along the southern portion of their historic range. Threats are illegal shooting, habitat disturbance, poisoning from lead shot in carcasses, and poison placed for mammalian predators.