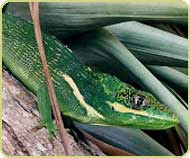 Description
Knight anoles grow to a length of 13 to 20 inches (33 to 51 cm). They are the largest of the Genus Anolis. The snout is long and wedge-shaped. The tail is slightly compressed with a serrated upper edge. Each toe is expanded to form an adhesive pad. The adhesive pad occupies the central portion of the toe and has an elongated form. The adhesive toe pads allow the anoles to easily run up smooth, vertical surfaces, or run body downward on a horizontal plane.

The body is covered with small granular scales with a yellow or white stripe under the eye and over the shoulder. They are bright green in color, which can change to a dull grayish-brown. There is sexual dimorphism. Males have a pale pink dewlap that distends when they are excited.

They are diurnal and fiercely defensive and territorial. If a snake or anything like a snake (sticks, garden hose) approaches too closely they put on a defensive display. They turn sideways, extend the dewlap, raise the back crest, and gape menacingly at the snake.

A male fighting with other males extends the dewlap and then retracts it, repeating this behavior several times. He rises on all four legs, stiffly nods his head, and turns sideways towards the rival. The male then turns bright green. Frequently the fight will end with the display, and the male most impressed by the other's display will drop his crest and slink away. If fighting continues, males rush at each other with mouths open. Sometimes jaws will lock if they continue, otherwise they try to go for the limb of their opponent.

Distribution and Habitat
Knight anoles are native to Cuba and have been introduced into Dade and Broward counties in Florida.

Knight anoles are arboreal. They live in the shady canopy of large trees.

Reproduction
Summer is the breeding season for knight anoles. Courting resembles fighting. The male nods his head one or more times and frequently expands his dewlap and then seizes the female by the nape of the neck. The male forces his tail under the female to bring their cloacas into contact. The male inserts his hemipenes into the cloaca of the female. Females usually lay up to four clutches of one to two eggs. Hatchlings are bright green with white bars on the sides.

Life Span
They may live about 15 to 16 years in both captivity and the wild.

Status
They are neither threatened nor endangered. Many anole species are sold in pet stores.

Fun Facts
They are easy to distinguish from other anoles by their size and the large, pink throat fan. They are usually bright green but can change to brown. Florida residents sometimes mistakenly refer to it as an iguana.

Knight anoles are relatively slow and can be caught by hand, but they do have strong jaws and sharp teeth. In Florida, most do not survive cold winters.