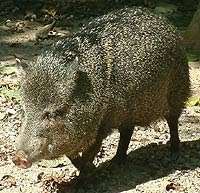 Description
Peccaries resemble domestic pigs, as they have a common ancestor. Adult collared peccaries can be up to a meter long, from nose to tail, and weigh as much as 30 kg, but usually less. They have proportionately large heads, slender legs, and coarse, dark fur with a white collar.

Range and Habitat
Collared peccaries can survive in a variety of habitats, including deserts, arid woodlands, oak woodlands, and tropical rainforests. They can be found in the Chihuahuan and Sonoran deserts of the Southwest and throughout Central America.

Behavior
Peccaries are highly social and live in groups of six to 18 individuals, led by a dominant male. They are active in the morning and evening.

Fun Facts
Collaried peccaries are sometimes called "musk hogs" because of a strong odor emitted from musk glands near the rump and eyes.
They are also called "javelinas," the Spanish word for javelin, because of their short, straight tusks, which they use for defense.