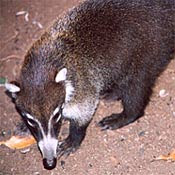 The four species of coati are relatives of raccoons, all of which live in the New World.

Social Structure
All females and young males live in bands (groups) of up to 20. Except during the breeding season, adult males live alone. Coatis are diurnal—active during the day.

Reproduction
During the annual breeding season, a single male is allowed into a band and mates with the females. After a gestation of ten to 11 weeks, females build a tree nest and give birth to a litter of two to seven young. Several weeks later, mother and young rejoin the band. Once males are two years old, they become solitary.

Status
Coatis are not endangered.