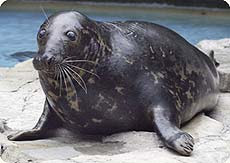 Size: Male gray seals are much larger than females, weighing 375 to 880 pounds and growing to almost ten feet long. Females weigh between 220 and 572 pounds and reach lengths of up to seven and a half feet. The size difference between individuals can be even more striking than these averages: Some males weigh three times as much as some females. Seals living in Canadian waters grow the largest.

Habitat: Gray seals breed in a variety of habitats where disturbance is minimal, including rocky shores, sandbars, ice flows, and islands. They feed in cold open waters.

Natural Diet: Gray seals eat a wide variety of fish, squid, octopus, and crustaceans such as shrimp. Sometimes they eat a seabird or two. Small fish are swallowed whole, while larger ones are held in the seal's mouth and torn into smaller, more easily swallowed pieces with the claws on the front flippers.

Reproduction: Gray seal breeding seasons vary, but most breeding takes place between late September and early March. Males posture or fight for access to multiple females, which congregate at haul-out sites to bear and nurse their young. Gestation lasts ten months to a year, and pups are born at haul-out sites the season following mating. They wean about three weeks after birth. Adult females breed again at about the same time as their young wean. Females usually start breeding at three to five years old. Although males are ready to breed at four to eight years old, due to competition with older males they rarely do so before ten years old.

Behavior: Gray seals congregate in large groups for breeding, pupping, and molting. During the four- to six-week-long breeding period, neither males nor females eat, drawing from their fat (blubber) for nutrition. Size and fat reserves play an important part in successful breeding. Male seals that can spend more time on land chasing females, and less time feeding at sea, have greater mating success. They also gather in small groups to rest on land. But when it comes to finding food, gray seals dive alone or in small groups.

Past/Present/Future: Over the centuries, gray seals were hunted commercially and for subsistence and many populations declined. In recent years, many have bounced back. Today, they are protected in many areas and their harvest is limited in others. In some areas, a bounty exists on these animals because they sometimes damage fishing nets, eat commercially valued fish, and carry a parasite called the codworm, the larvae of which live in fish and reduce their commercial value. Many gray seals, especially young ones, get tangled in fishing nets and drown. However, except for the Baltic population, gray seal populations are doing well—holding steady or increasing.

Harbor Seal (Phoca vitulina): One of the most widespread seals, this animal coexists with gray seals throughout much of the gray's range.

Northern Fulmar (Fulmarus glacialis): A gray, gull-like seabird that feeds on fish and other marine creatures in coldwater seas.

Gray seal pups grow extremely fast on their mother's fat-rich milk, adding two and a half to over three pounds per day until they are weaned at around three weeks old.

Gray seals dive up to 475 deep and can remain underwater for up to 20 minutes at a time.

The Natural History of Seals, by W. Nigel Bonner, Facts on File, 1990.