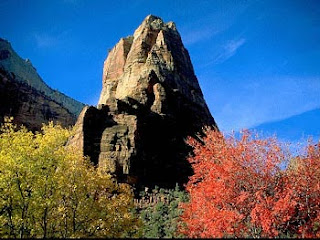 Zion National Park is a United States National Park located in the southern Utah regions of Dixie and Canyon Country. The park protects the incredible rock formations and high sandstone cliffs within its boundaries and is a favorite spot for hiking, backpacking, canyoneering and climbing. In fact, Zion has some of the most spectacular trails in the National Park System. Visitors to Zion walk on the canyon floor and look up, rather than looking down from the rim as in many parks. In addition to the magnificent monoliths and cliffs, the park is known for its desert landscape of sandstone canyons, mesas, and high plateaus.

History
Mormon pioneers arrived in Zion in 1863. Issac Behunin built the first log cabin in Zion Canyon, near the location of the current Zion Lodge. Behunin Canyon, a technical slot canyon, was named after him. During the remainder of the century, small communities and homesteads in the area struggled to survive. Pioneers gave the canyon the name "Zion", a Hebrew word meaning safety, or a place of refuge. Despite the name, the canyon offered little arable land, poor soil, and catastrophic flooding, making agriculture a risky venture. By the first decade of the 20th century, the scenic qualities of southern Utah, and Zion Canyon in particular, had been recognized as a potential destination for tourism. In 1909, a presidential executive order designated Mukuntuweap National Monument. The new monument was, however, virtually inaccessible to visitors, since the existing roads were in poor condition and the closest railhead was a hundred miles away. The monument's name was changed to Zion National Monument in 1918, and in 1919 the monument was expanded and designated a national park. Visitation to the new national park increased steadily during the 1920s, and in 1930, the newly completed Zion-Mt Carmel Highway allowed motorists to travel through the park to Mount Carmel Junction, then on to Bryce Canyon and the Grand Canyon. This highway was one of the greatest engineering feats of modern times, requiring the construction of a 5,613-foot tunnel, the Zion-Mt. Carmel Tunnel, to negotiate the vertical sandstone cliffs of Zion. The switchbacks leading up to the tunnel proved to be an even greater task to accomplish. The Kolob Canyons section, near Cedar City was established as a National Monument in 1937 and added to Zion National Park in 1956.

Landscape
The hanging gardens of Zion
Throughout Zion Canyon, you will find life growing on the steep cliffs. Beautiful wildflowers, hanging ferns and moss thrive in the micro-environment. How does it survive in this seemingly arid land?

It's the surprisingly porous Navajo sandstone that makes up the high cliffs of Zion. Rainfall and snow melt collect on the top of the mesas and seep through the sandstone until it reaches the tougher Kayenta formation, where it is forced out of the rock, creating springs in Zion Canyon and allowing hanging gardens to grow. Perhaps the most famous example of this is Weeping Rock, which lies below the mouth of two hanging canyons. The canyons serve as drainages, collecting surface water runoff and concentrating it into the Navajo sandstone, supporting the Weeping Rock spring. Other springs can be seen in various places of the park including along the Riverside Walk at the Temple of Sinawava.

In addition to plant life, the springs also provide a home for freshwater snails, like the tiny Zion Snail, which is only found in Zion National Park. Keep an eye out for other wildlife around the springs, such as birds, lizards, and various insects.

Zion National Park encompasses some of the most scenic canyon country in the United States. The park is characterized by high plateaus, a maze of narrow, deep, sandstone canyons and striking rock towers and mesas. The North Fork of the Virgin River has carved a spectacular gorge in the park called the Zion Narrows. The canyon walls in some places rise 2000-3000 feet above the canyon floor. The southern part of the park is a lower desert area where colorful mesas border rocky canyons and washes. The northern sections of the park are higher plateaus covered by forests. To the east is amazing slickrock country and a vast array of unpaved trails, hidden canyons and peaks to explore. 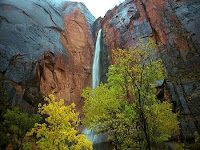 * Zion Canyon Visitor Center, ☎ +1 888 518-7070. Located near the south entrance and the main access to the Zion Canyon Shuttle. There's some interesting exhibits to help further plan your visit, like topographical models of the park and video screens. Rangers are on hand to answer all your questions. There's also a nice bookstore.

* Zion Human History Museum, on the main road, 1/2 mile north of the south entrance to the park. 10AM-5PM Daily, longer hours in the summer. Closed November through February. Exhibits about human activity in the park and an orientation film shown every half-hour. The Zion Canyon Shuttle stops here from April through October.

* Zion Canyon Scenic Drive. The 6 mile road through Zion Canyon leads past some of the most fantastic rock formations in the world, with colorful sandstone cliffs rising 2,000 to 3,000 feet from the canyon floor. The seemingly mild Virgin River has almost single handedly created this canyon over a period of 13 million years, with much of the work happening during periods of intense flash flooding. The road into the canyon is closed to private vehicles from mid-March until November.

* The Narrows. This hike is accessible from Zion Canyon, but the full hike begins in East Zion and ends in Zion Canyon. The Narrows is an extremely popular off-trail hike. The route follows the North Fork of the Virgin River, along the floor of a very narrow canyon with impossibly high walls. This trek is one of the park's most amazing destinations. The full hike is a 16-mile one-way trip. The Narrows may close at times due to high waters or flash-flood danger. Wading will be required, so wear footwear and leg coverings that can get wet. Water depth in June 2007 was approximately mid-thigh. The river flows right up to the canyon walls for much of the hike, so you can't avoid wading. Sturdy hiking poles will help navigate the river.

* Zion-Mt. Carmel Highway. A 10-mile road that connects the east and south entrances. One of the highlights of the drive is a mile-long tunnel, the Zion-Mt. Carmel Tunnel, that was completed in 1930. East of the tunnel is Checkerboard Mesa, a sandstone mountain that is etched with fantastic cross-bedding of lines and shapes, made through the forces of erosion. The surrounding slickrock area is full of similarly amazing rock formations.

* Kolob Canyons. Located in the parks northwestern corner, Kolob Canyons is a less-crowded area of the park that contains beautiful red-rock canyons, incredible overlooks, and lush scenery. A visitor center is located at the entrance to Kolob Canyons, just off of Interstate 15.

* Kolob Terrace. To get to this remote and beautiful area turn off Highway 9 at Virgin. Follow the Kolob Reservoir Road for 21 miles to the park boundary at Lava Point.

Flora Fauna
Although Zion is in an arid desert climate, the park has almost nine-hundred native species of plants, seventy-five species of mammals, two-hundred-ninety species of birds including the recent addition of the California Condor, forty-four species of reptiles and amphibians and eight native fish.

There is a wide variety of plant life in the park, seeing that the unique geology has created diverse environments such as deserts, canyons, slickrock, hanging gardens, riparian, and high plateaus. There are many beautiful wildflowers, including the Sacrad Datura, which is common in Zion and is often found along the Zion-Mt. Carmel Highway and on the canyon floor in Zion Canyon.

Climate
Weather in the park varies greatly with elevation, and even at the same elevation may differ by over 30°F between day and night. During the spring the weather is very unpredictable, with stormy, wet days common, although warm, sunny weather may occur too. Precipitation peaks in March. Summer days are hot (95-110°F), but overnight lows are usually comfortable (65-70°F). Afternoon thunderstorms are common from mid-July through mid-September, making flash floods (if hiking in one) in the canyons a danger. Autumn days are usually clear and mild with cool nights. Winter storms bring rain or light snow to Zion Canyon, but heavier snow to the higher elevations such as the east side of the park, Kolob Terrace and Kolob Canyons. Clear days may become quite warm, reaching 60°F; nights are often in the 20s and 30s. Winter storms can last several days and cause roads to be icy, but the Zion-Mt. Carmel Highway is owned by the park and the NPS keeps it in excellent condition even in the winter.

Orientation
There are sections of the park that are not connected by road; the Kolob Canyons area is in the park's northern area and offers interesting canyon views and hiking. The remote Kolob Terrace offers an uncrowded and scenic drive, spectacular slot canyons and hiking. The highly photographed "Subway" is found in this section of the park. The more popular (and more crowded) Zion Canyon area is in the southern portion of the park and contains many of the park's most famous scenic wonders such as Angels Landing and the Great White Throne. The Zion-Mt. Carmel Highway runs from the south entrance of the park to the east entrance featuring magnificent landmarks and hiking along the way such as East Temple, Checkerboard Mesa and the Great Arch. The Zion Narrows and Orderville Canyon, two of the parks most popular canyons begin on the east rim of the park and end in Zion Canyon.

National Parks are our most treasured landscapes and what better way to view their astounding beauty than from the luxury and comfort of a passenger train. Train travel is unique in that you can see many vistas not accessible from highway or air.

Utah the Zion National Park is the kind of park you would love to visit. Get to enjoy your vacation at this lovely national park.